You are here:
Business 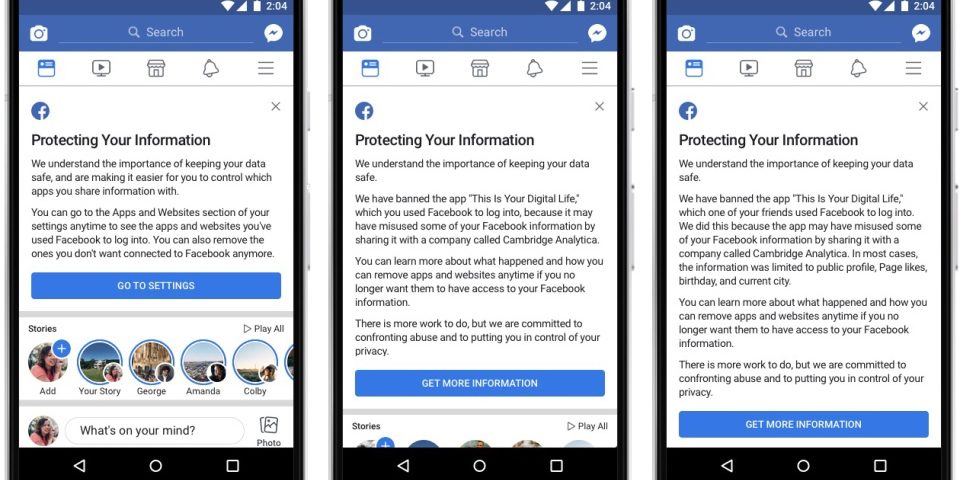 The application “This Is My Digital Life” has played its part and now the repercussions are faced by the users. Here the users who accessed the app are also at fault as one should never download apps that are just random and in return ask your information.

On April 9, Facebook through its blog post revealed that the users will be seeing a link in the header when they launch the application.

The link will showcase what applications a user is using and what all information the user is sharing with the apps. If the user’s information is being shared with Cambridge Analytica then he or she will be able to check that as well.

So now there are going to be three possibilities here. Either you have used “This Is My Digital Life” or your friends has used or you no one including your friends have used the app. With Facebook’s new update, when you will open the app, the application will display “Protecting Your Information”.

When you click the “Apps and Websites”, a window given in the below screenshot will appear in front of you. The window will be displaying the applications that you accessed with Facebook login. Now in my case, just 6 applications are active through Facebook. So only that are visible in the window.

You can also view the expired and removed information of the applications by clicking those particular tabs.

If you want you can also remove the application. Just click the small box that you are seeing to the right side of every app and a window will popup given in the below screenshot. So here I want t remove Voot app, I clicked on it and a window asking “Remove Voot” appeared.

Therefore, Facebook is taking every step to protect the privacy and data of its users. In this scandalized situation, it is the responsibility of all the users to stay alert and not use the applications that do not have substance in it.

As the world wakes up to digital era every day, always keep a note of what you are doing. Be safe, digitally!

Facebook Cambridge Analytica Scandal – Everything to Know About It and How to Secure Private Data
April 13, 2018

Successful People Rules: How to Create Your Own Opportunities in Life and Get Results
March 31, 2018

This Leaked Audio Is a Reason to Break Free and Work For Yourself
July 11, 2017